I underestimated the number of switchbacks on this trip.  We started the morning with the famous Stelvio Pass. This road has been used in movies and car commercials and is as famous a motorcycle road in Italy as The Dragon is in the US- minus KillBoy and the tshirt/sticker shops!  With 34 numbered tornate up on side and 48 down the other, Kevin thought with all the work he did, it felt like it took more than an hour.

We made it to the Reschen Reservoir where the bell town from the flooded town is still visible.  Reading the information on the interpretative display, it’s apparent that when the town was flooded in 1950, the locals were not in favor as it was described as the tragedy of Reschen Reservoir.  I hate that they felt that way, but it sure is a unique site.

We checked our 4th country off the list today as we headed north into Austria today and up Ötztal Glacier Road, the second highest pave down road in Europe.  The trip up was not as eventful as our ride up Mt. Evans in Colorado, but eventful all the same. 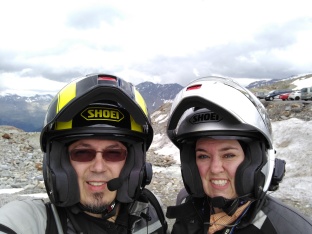 This is the smile you get when your cheeks are smashed by cheek pads!  Kevin calls it my honey badger!

As we headed up the mountain, we were stopped at the gate and told we had to be back down in an hour or stay up there for 4 because they were closing the road.  There were crews setting up banners and corrals like you see in marathons and other road races.  The closer we got to the end, there were TV cameras, lots more signage and a PA blaring hype music- still no event name!  We were directed away from the finish line (darn it), took this selfie and headed down.  It was 5°C so we were not at all interested in being stuck up there for whatever was about to happen.  Come to find out, the Tour de Suisse was ending there today and we were almost involved!

The rains held off for the most part today with only a drizzle while we were at lunch.   The afternoon of the 425km day was full of more mountain passes and tornate.  Kevin and I both agree that the best stretch of road was 40km or so when we went up SS241 to Vigo di Fassa and back down SS248 over Pordoi Pass into Arabba, where we are staying tonight. 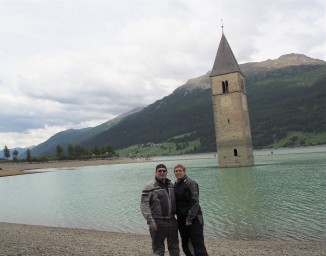