Today we planned to ride from Aosta to La Thuile, then south through Vanoise Park in France (parallels Gran Paradiso Park in Italy) then on to Alba. With nearly an inch of rain in the forecast from a storm cell that covered the entire Aosta Valley region and most of the Piedmont region, we decided to change course. I’m glad we did! For the first hour of our trip south toward Torino, we rode through the hardest rain I’ve ever experienced – my Frog Toggs croaked after 30 minutes, so I was soaked through, and Stephanie’s rain gloves were left in Milan during our gear-shuffle at the rental agency (thus her black hands from the dyed leather palms of her summer gloves). Twice we ran through standing water that was above my ankles – the second time Stephanie asked
“Are my feet sitting in water?”
“Yep.”
“Punch on through.” (nod to the Twisted Riders)
Creating a bow wave on a street bike isn’t my idea of a good time, but I’m happy that it happened on level ground rather than switchbacks up in the mountains. Click here for a short video, taken just outside Aosta (GoPro mounted on left fairing).

We wound up slabbing back to Milan to pick up a couple of forgotten items, then south to Parma. We stopped for lunch in Piacenza, where we ordered by pointing to meals in a display case. I figured they were examples of what would be prepared for us – nope, they were pulled out of the case and microwaved “to order”. Stephanie’s tortellini was decent, my pork/veal/chicken cutlet paled in comparison to our “gas station” pizza in Venice. Oh well, it was fast and cheap.

On our way to Parma, we visited the Labyrinth of Masone in Fontanellato. 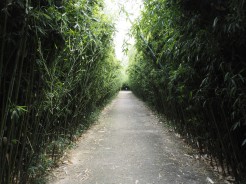 Haven’t we been here already?

At the end of the maze

Kevin’s ready for the challenge.

It took us about 45 minutes to make our way through the world’s largest bamboo maze to the pyramid at the center; then we viewed Ricci’s eclectic art collection.

Once in Parma, we ate supper at a local grocery store / restaurant, which included incredible Parma ham, a pork shoulder stuffed pasta (with no cheese inside), and strawberry panna cotta – yum! 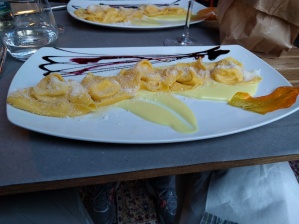 So, not a lot of motorcycle roads today, but plenty of roads on a motorcycle. 🙂