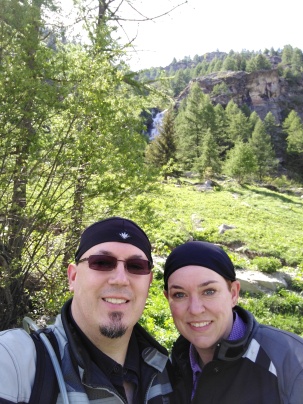 Today’s ride out of the Aosta Valley of Italy took us north over the Gran San Bernardino Pass, a ridge between Mont Blanc and Mont Rosa, the 2 highest summits in the Alps. I could see roadways as we headed up the hill (understatement), and I kept thinking “Surely, we are not going up THERE,” Yup, we did. But as with many high peaks, they create their own weather. The journey turned from pleasantly crisp to drizzle to rain and fog to…is my face shield fogged or is it just that foggy? Besides being wet, the road was in great condition and the switchbacks were handled easily. We had been following a rainbow up the mountain and finally, it was below us, something we had never seen before. 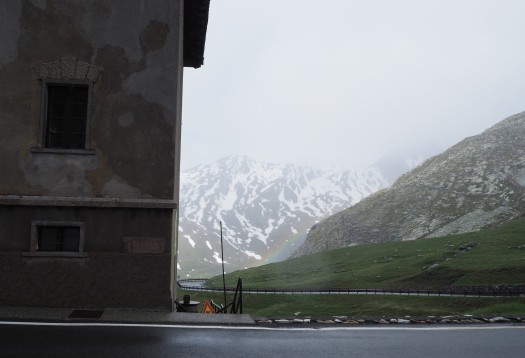 On top of the rainbow

Kevin pulled over to put on his rain gear and I got a picture of the rainbow. We continued toward Martigny Switzerland and unceremoniously crossed the border. We don’t even recall seeing a sign, but noticed the flag and signage change. No pictures for sure as the camerawoman did not want to break any of the water/air tight seals she had!

Heading down the mountain, the roads turned from switchbacks to more twisties, so it was a nicer ride. Still, a very different ride than home because you are riding out in the open, between 2 gigantic mountains; not through tree-lined roads like we have.

The scale is one thing that pictures can’t adequately show. The scale of this area is huge! If you’ve ever been to Alaska, the mountains are big, but what we saw when we visited was that they were far away with big valleys. Colorado is similar too. Maybe a nod to the civil engineers, but these roads tiptoe the edge of one mountain with another one right next to you. Think Colorado’s Million Dollar Highway on steroids.

We headed southwest to where we planned to get the best view of Mont Blanc and maybe even a gondola ride if the weather cleared. We approached a one lane toll plaza – but it wasn’t. We stopped at the first of two successive stop signs and waited for someone to greet us. None of official looking personnel on the far side of the building moved. Kevin’s looking around trying to figure it out and I’m trying to make heads or tails out of the sign with a lot of words…French words. My 4 years of French in high school is not coming back to me and Kevin moves on to the second stop sign. And we pause-still no movement in the building. We decide that if they were interested in speaking us, they would have approached, so we went on. In the rear view, I could see that they were stopping cars. I guess forming the EU was supposed to make border crossing easy…and it was! I at least expected a sign that said “Bonjour,” or “Vive la France!” or something.

Moving on to Chamonix France, the mountain tops were still covered in mist, so we skipped the gondola ride and opted for chocolate croissant and espresso/hot chocolate.

It was time to head somewhere to watch the MotoGP motorcycle race that was being held in Italy! Yes, we considered going to the race, but the logistics would not work out, so watching from Italy would have to do. Finding a sports bar is not the easiest thing to do, so we decided to bust it back to the hotel. The quickest way was through the Mont Blanc Tunnel. I am in charge of paying at toll booths and about choked when the toll lady told me €28.80! For a tunnel? It is a 7 mile tunnel, so I guess they have to recoup their investment.

After watching the race from the same timezone in which it took place, we headed for an afternoon ride to Gran Paradiso National Park. The Park was just a down and back path that mostly followed the glacier blue/green colored river filled with snow runoff and more great views. We stopped for a few pictures and I insisted that I wanted to touch the water to see how cold it was. Kevin was not a fan of the idea, but with his help, I made it down, he took a picture and I made it back up. Easy peasy – and the water was super cold. 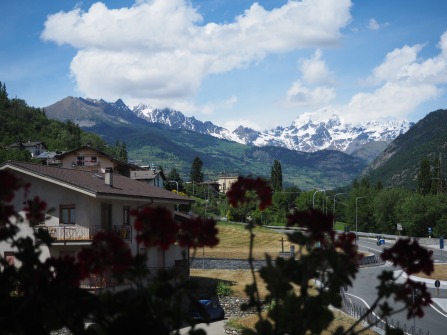 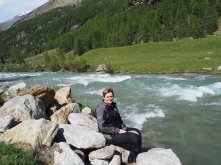 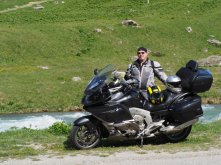 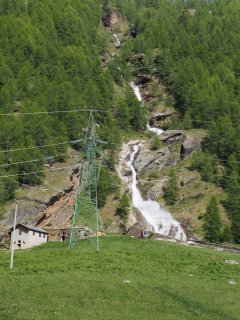 It was the first day of multi-country, multi-mountain and multiple firsts and we can’t wait to experience the next. Buona notte!

You can click on any picture to see it larger.